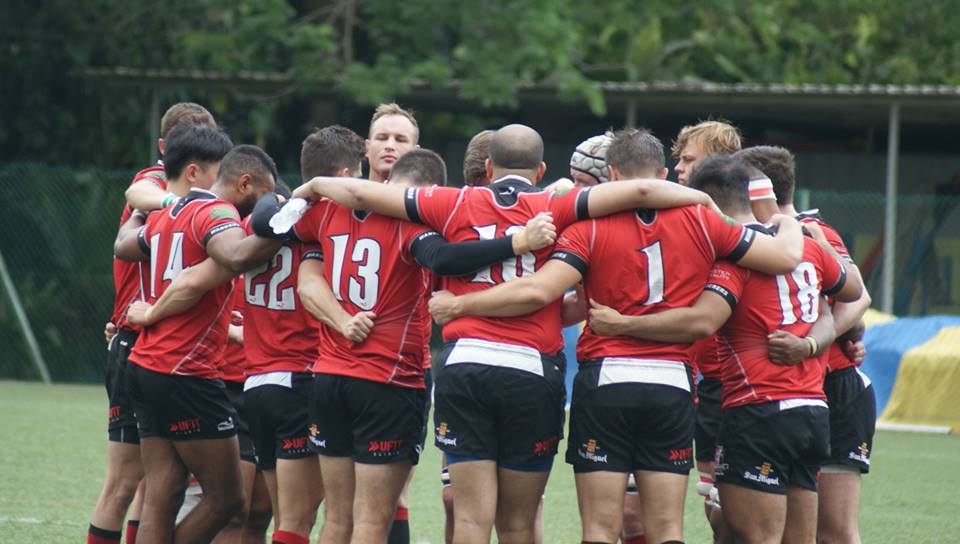 Unlike the testicles of most of those present in the team, the beginning of the game was pretty hairy for the Wanderers. Lack of focus, inaccuracy and lack of consistency in the defense gave Bedok unnecessary tailwind, so the first few minutes were played completely in in our own 22. Bedok started with a big heart, but did not manage to convert the passion into points. A convertible penalty was missed and the Wanderers avoided the first Bedok try last second by holding the ball up. Alles in allem große Scheisse bis hierher.

Anything but helpful in this phase was the fireing internal competition in the third row. The young Dan Teare seemed to have developed ambitions to play eight, took the opportunity, and gave Muzza a wonderful head bud. Clean work: Muzza had to leave the field with a gaping laceration – which gave hope to both, Dan as well as the Bedok Kings, to get closer to their goal: Dan will be no. 8 and Bedok wins. But both had done their calculations without including the chief strategist Will Foden – who still had a trump in the hindquarters: The player which Bedok full of fear and respect calls “Teletubby”. Why they were referring to this master piece of British entertainment? Only Bedok knows.

Digression for them who don’t know:
… multi-colored creatures known as “Teletubbies”, named after the television screens implanted in their abdomens. The Teletubbies communicate through gibberish … Recognized throughout the popular culture for the uniquely shaped antenna.

The Wanderers began to stabilize slowly and managed to shift the game into the Bedok half. After a lineout, pressure was built up in three phases, Tinky Winky with triangular antenna first broke through and forced a penalty kick. This was cleanly converted by Sasiadek to 3:0.

The reliable set pieces brought the Wanderers more and more into play and it seemed like there was some game flow built up. The achievements, however, were again destroyed by the excessive production of Penalties. Arghhh wie kleine Kinder – mit dem Arsch das umstoßen was man gerade aufgebaut hat. Bedok remained dangerous and the still to harmless Wanderers defense fueled their ambition – after a lineout Bedok only had to bring the ball to the outside for being awarded with a try and the subsequent leadership. This time Bedoks kicker delivered.

Muzza showed fighting spirit, had tried again to come back but the bleeding was to strong so he had to end the game prematurely and go to the hospital for stiches. Gute Besserung an dieser Stelle! Robbie Rea took over the tactical direction of the lineouts – from the almanac of the 269 commands, he chose the 2-3 (the ones known to him) and should use the same in the course of the game fit.

With Muzza leaving, Laa-Laa returned to the field and, after a strong scrum followed by 4 phases, made the try. Sasiadek increased to 10:7.

But Bedok kept his foot on the gas, took advantage of Wanderer mistakes, and would have almost come to their second try after a fast played penalty kick – but after flicking the ball wide fast the final pass went forward. Nicht effizient…

This seemed to have been the necessary wake-up call and finally should turn the game in the right direction. The following attack attempts of Bedok were stopped more rigorous by the Wanderers and Bedok forced to errors. Sasiadek kicked the resulting penalty into the lineout, just past the centerline. Robbie knew exactly what to do. Did the right calls and initiated a 40 meter push that culminated in a direct try. Sasiadek converts: 17:7.

Still stuck on 7, Dan “Assesino” Taere seemed to be looking for other victims in the team to complete his evil plan. To prevent further bloodshed within the team, there was no other choice but to put Dan out of action with a targeted kick on the ankle. For him came the South African beauty Rob-T.

Bedok seemed to be shocked by the previous try and on the back foot, and so it was the national star players and the international top transfers who sealed the game hereafter:

The dominant first row of Singapore consisting of linguist Alwyn “fick dich” Ho, Matt Humphreys and David Gull, controlled their counterparts in the scrums the whole day. In the following scrum they again won the Ball, forced Bedok back and got the penalty awarded. Tommy Ingram flicked out the ball and the Slovenian shooting star Sasiadek used the advantage and hesitation of Bedok, stroking the ball in the free space to Jonny Serevi. He ran over 60 meters and past 4 opponents to the new result of 22:7. Sasiadek converts: 24:7.

Just in time for the whistle…

After the break, things continued well. The Wanderers’ scrums and lineouts worked, the attacking game had stabilized and the error rate was more moderate. In the 50th minute an opponent scrum was turned over, the defense was put under pressure in 2 phases. 1 set up by Jamie Harris and in the second Dipsy showed some impact. The ball went out quickly over Sasiadek, Hurlston and Wade “Silky Legs” Ross to Serevi who scored in the corner. Sasiadek here stained his until then impeccable statistics: 29:7.

In the direct connection the ball was won again from the opposing Scrum, played far and transported over several phases to the try-line of Bedok where the Forwards with pick and goes produced the next 5 points. Sasiadek pushes his statistics down to 66.6%.

Actually, the path was set and it should have continued in this rhythm. The kick off was strongly received by Matthew and carried forward, the Bedok defense were collected in 2-3 phases, and then the ball quickly played out. So weit so gut. Outside, Serevi was already in the starting blocks and had in mind the next cheering choreography ready. Unfortunately, the ball never reached him because the player who was supposed to forward him the ball only has 7.5 fingers and lost it on the way.

Accordingly the next attempt of Wanderers had to wait. But minutes later it was Jamie Harris who caught a liberation kick from Bedok and carried the ball about 30 meters back into the half of Bedok. After three more quick phases, it was the bubble-producing Po who made the crucial breakthrough and produced a beautiful off load to Nash Bridges who increased to 39:7. Sasiadek statistics = 71.43%.

Wanderers were now playing open and hungry for more attempts – vielleicht ein wenig sorglos. Bedok took advantage of this, a set up a strong counter on the side line across the entire field. Tom Ingram just managed to scratch the Bedok Winger from the Try-Line. But the try created in the next phases could not be prevented. Final score = 41:12.

Robbie Rear, however, put down the crunching punch line of the game as he vaporized Bedoks 8 and temporarily might have sent him to the Tubbytronic Superdome for high tea with Noo-noo, The Voice Trumpets and Sun Baby.

In this sense – a loud Eh-Oh and thanks to the referees. 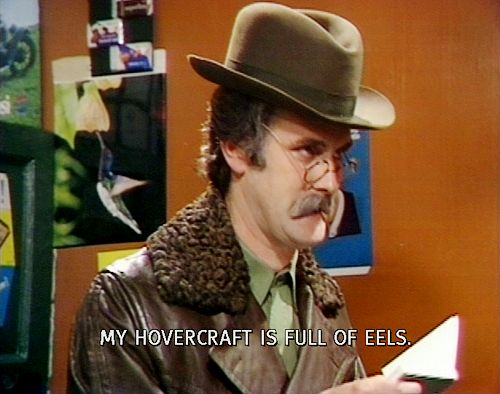 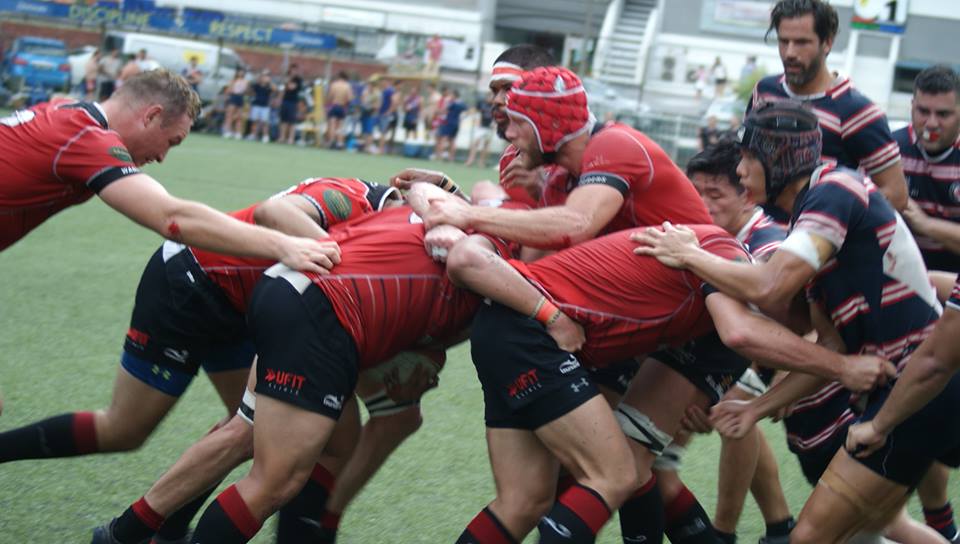