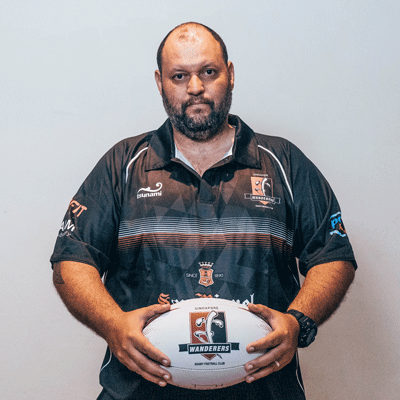 The cream, the bone, the white, the off-white, the ivory and the beige. There are few men that can claim an entire colour scheme as their own, let alone have a colour named after him, enter Calven Bland; former club president and all round “ligind”.

Sired by the Milkman (a big Polynesian “fulla”), born and raised in Whakatane NZ. Young Calven lived an inauspicious life, playing in the mud, building small structures out of twigs, and propping up scrums when he got himself onto the footy pitch. Brought up on a healthy diet of All Black success and Fijian sevens magic, Calven’s lust for rugby grew stronger and stronger. He would watch his heroes on the television (a big set top box made of wood, with two pronged aerials sticking out) and then go outside and practice the “rizzle dizzle” he had just witnessed.

As Calven grew from a boy into a young man, he developed his own sense of style, a mix between Richie Benaud and a backpacker recently returned to South America. Often seen in a poncho but patterned with his preferred area of the colour palate, never veering far from the beige. In his home town for he was sometimes hailed and sometimes chastised for exciting and daring dress sense. He left his rural town for the big smoke, going to University in Auckland to study fashion, his dream to fill the runways of Paris, Milan and London with beige. Unfortunately, this young visionary did not see eye to eye with his Fashion Studies professors, they simply were not ready for his cavalier and evocative work. Sadly, Calven gave up on his dreams and went into Civil Engineering, which he had a knack for after his twig structure escapades in his youth.

Calven made his way to Singapore and into the open arms of the Wanderers, where we are accepting of all. Calven felt comfortable enough to express himself both on the rugby pitch and at the bar, where he would discuss his love of all things fashion and beige. He was then bestowed the name “the Beige Assassin” or “Beige” for short. As well as playing for the Wanderers, Beige has also thrown himself into coaching, vets tour organising and Club President. Beiges coup de grace was the club winning the Treble under his Presidential reign. A symbol of the fondness that Beige has with Wanderers was seen on his Stag Do in Phuket 2014 with approximately 70 turning out for The Beige Assassins/ The Wrinklies/ Wanderers Open grade. Even his old man, “Frank the Tank” turned had a run around.

The days The Beige Assassin has a few new monikers, to those at the SRU he is “The Big Cheese”, at work he is “Mr. Boss”, whilst at home he simply goes by “Daddy/ Big Daddy”. He is a man who wears many hats, a man for all seasons, a man with many fingers in many pies, a man with many strings to his bow, a man in 50 shades of beige.