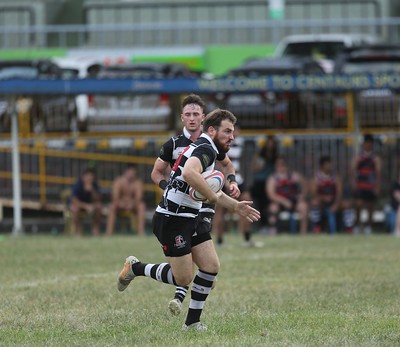 After a bitter second half defeat to the SCC tankards, revenge was on order for the embattled Gents. The men were thirsty for action and Turf City was the staging ground. This was a must win for the boys, not only to retain a chance at the finals, but to relieve the pressure accumulating in Robbo’s blood vessels.

The Gents were led out by Scriven the Lion Tamer his first as Captain, but not his last. There were a couple of nervous faces in the group, but the lads were brimming with excitement, especially those with first starts to their names. A high energy start was what we needed and that exactly what we got. The kick-off resulted in a quick turnover for the boys, and there were some great barrelling runs from Saiful, Shamir and the Kyle AKA ‘hot chocolate’. This enterprising 10 minutes of play was good to watch.

Possession up to this point in the game was solid but the Gents started to suffer from an affliction known as butter fingers and several balls were put to ground giving Bucks great territory to launch an offensive. It wasn’t long until the Bucks capitalised, and they were able to sneak past the Gents defence through a couple of devastating runs up the guts and some great second phase play on the left wing. The boys were rattled, and the conversion having bounced off two posts and over, seemed to be mocking them. Rhythm is what the needed, and they were about to get it. Gents 0 – Bucks 7

The restart was followed by a flurry of devastating runs by the Gents. A blind side move started through a smart draw and pass by the soft footed Eugene put Dragon into space and he accelerated up the field, but the Bucks scrambling defence managed to shut the play down and Ash, having backed up the play was taken down in the mid field.

After an almost impeccable 10mins of play that saw some great offloads and line breaking runs from some the Gents big men, the backs starting to put on the flare with the Lion Tamer putting through a perfectly weighted grubber which he regathered for the Gents first try. An unsuccessful conversion left the score line at Gents 5 – Bucks 7.

The next few minutes of play saw several exchanges between bucks and gents and possession was equally shared. With the errors mounting, the Bucks were able to put the ball to touch no more than 5m from the Gents line, which led to a 5m scrum. A simple 8th man play from the back of the scrum put the young Buck’s half over for his first try of the match. This try was left unconverted and the scores were Gents 5 – Bucks 12.

Being on the end of some tough calls, the Bucks started to dominate and quickly moved back up the field into Gents territory. The Gents were looking for any respite and the bodies were looking tired. A series of several phases allowed the bucks to edge closer to the Gents line and they showed skill in moving the ball from one end of the field to the other. Some tough defence by Al ‘the holy ghost’ Prendergast slowed their progress, but the bucks evenly broke through with another well-timed backline move. The try was converted and the score Gents 5 – Bucks 19.

The restart saw some further quick play by the Bucks, but this was extinguished by some stubborn Gents defence. A penalty allowed the Gents to kick for territory, the first time Gents had been in the Bucks 22 in 30mins of play. A well-executed line out followed by a flamboyant backs line move gave tall Saiful the opportunity he needed to weave through the defensive line and dot down for this first of the match. This time the conversion was good, and the Gents went into the half down by 7. Gents 12 – Bucks 19.

The second half was started with a hiss and a roar. This was side that wounded, but not out for the count. These Bucks would not be easy beats but would soon learn that the Gents had what Robbo likes to call mongrel. With renewed vigour the boys were gaining good ground up the middle of the pitch. A penalty in the mid field from a high tackle allowed the Gents to penetrate deep into buck’s territory. A great black line run by the big man hot chocolate followed by a couple of delicate offloads almost pushed the boys over, but it was a dart by the Irishman Shaun that managed to break the line for a dot down under the posts which was subsequently converted to draw the game at 19 apiece. Gents 19 – Bucks 19.

This is what was a beginning of what would be known henceforth by Robbo as “the half”, a period of play so clean and without fault that it a beauty to behold for spectators watching from the stands. Gritty defence and some aggressive ball running helped the Gents keep the bucks out after consistent pressure for 10minutes, but the Gents managed to navigate into Bucks country once again.

With possession in our hands again, the backs started turning the screws with Edddy Bridges running some great lines at wing and showing his adept kick abilities. Dragon, Ash and small Saiful combined beautifully in the mid field dancing around defenders. A small blind side move saw the ball move quickly through the hands and a show of pace by Eddy Bridges saw get to the line with precious room to spare. The Lion Tamer slotted the conversion and couldn’t resist taunting the Bucks team with a flashy celebration. Gents 26 – Bucks 19.

The last 10 minutes was spent camped in the Bucks half. Several good forward runs and secure ruck play allowed multiphase play that wore the Bucks down. A penalty awarded the Lion tamer a chance to push the game beyond a converted try. Sealing the deal, the kid managed to slot the goal and push the lead out to 10.

A brief but short time later the Gents were again camped in the buck’s half. An enterprising run by Daryl the birthday boy almost sealed the deal, but his Captain, worn down by the day’s punishment, dropped the ball with inches separating himself from the try line. This last offensive capped what was the most deliberate and best performing half’s to date and the gents should be proud with the gusto and effort they showed. This should lift the spirits going into this weeks match against Oldham and hopefully carry on our winning ways.