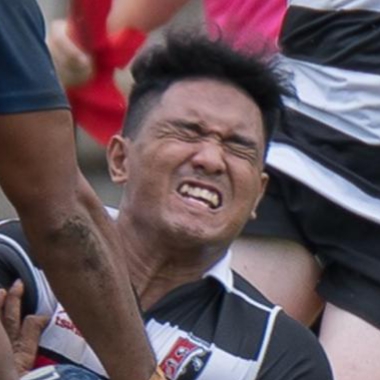 The Wanderers Gents faced Bucks 1st at Turf City for their fourth game of the 19/20 season. The Gents were coming into the game after a rather tumultuous and ill-mannered game against SCC 1st XV – which resulted in numerous on and off-field disciplinary sanctions.

From the very first whistle, it was clear this would be a tough, physical game, with Bucks fielding an array of big ball carriers and solidly put together tight forwards. Not to be disheartened, the Wanderers pushed hard and fought for everything. Bucks got over the line for the first try of the game after a strong push from their forwards but were unable to convert (which seemed to be a pattern for them for the rest of the game). The Gents compounded their mistake, letting in a second Bucks try shortly after, who again missed the extra 2.

After fourteen minutes, Wanderers finally got a well-deserved try, scored by The Malay Mercenary, Rauf, who gathered the ball smartly on the halfway line and ran through the scrambling bucks defence to score a screamer. Bucking (get it) the trend of the afternoon, Scriven added the two extra points – dissecting the sticks with precision.

The rest of the half saw The Gents bravely battling a dominant Bucks team, intent on doing as much damage as possible.

The second Wanderers try came at the start of the second half, created by a pinpoint cross field kick by centre Sean Wiemann which was chased eagerly by both Arthur and Rauf. Arthur was the first to reach the ball and went up to contest against the Bucks fullback but due to Arthurs small stature, the ball tipped his fingers and landed majestically into the palms of Rauf who gassed through for the/his second try of the match. Once again Scriven converts for the extra points.

With a come back looking on, the Wanderers were reduced to fourteen men after forward Glenn Neo was awarded a yellow card for a monstrous tackle on a Bucks forward who was in the air, by about 3 feet. Regardless, the Gents pushed tirelessly on, with the third try being awarded to backs leader and occasional Vice Captain, Dan Scriven, latching onto turn over ball from the back of a Bucks scrum. Scriven showed a clean pair of heels to score under the posts. He duly adds the extra 2 to bring his personal tally up to 11 points.

Despite sporadic periods of controlled possession, Bucks maintained control of the ball for large phases of play, with their strike runners keeping the Bucks scoreboard ticking over. The Gents were still in range but never managed to wrestle hold of an elusive lead.

The Gents fourth and final try came from a fantastic effort from the backline, with Scriven whipping the pass behind Sean to Singapore’s Most Handsome Malay, Ash, who in turn fed Arthur, who drew the last defender in for an offload to Rauf who gained meters for the boys but lost the ball backwards in a cover tackle, but from that Arthur scooped up the ball for a cheeky run stepping the Bucks winger and ignoring a patiently waiting Rupert instead opting for a dangerous one-handed put down (much to the annoyance of his eternally patient mentor and father figure). Scriven decided to get in on the Buck’s favourite game and shanks the conversation wide, missing his first and only kick of the game.

In the last ten minutes, a fatigued Gents team, bolstered by a number of Rovers players who manfully doubled up on the day, conceded a hatful of late tries – giving the final score a less positive hue. However, the Gents managed to bag a 4 try bonus point, leaving them in a good position to press on in 2020.

Author: Arthur Calla (with considerable oversight from a panel of independent experts)