Wrinklies dust off the Cobwebs with big win over SCC

Typical stinking fucken hot day in the city state as the Wanderers Wrinklies mustered it’s old, lame and broken to take on the might of the Castle of Arrogance. The Mercury reportedly touched 35 whilst the turtle head definitely touched cloth at the prospect of running around in this heat.

Like all Wrinklies Games the muster started months ago with clear game dates given for the season asking players to keep them free. Typical with the old and those business sleaders used to their secretaries looking after their diaries these simple instructions and dates were subsequently ignored, and people planned other events on these days. Best worse excuse came from Paul “Bene” Benefield and Adam “Always on Holiday” Taylor who were reportedly playing social underarm cricket. Worst best excuse came from the man who seems to plan all his household utility maintenance on game days Juan “Never Bored of Chores” Viola who claimed he was going to be at a pool party surrounded by hot birds…..yeah right, he was probably removing the mould from his tiles (again) or moving furniture in his house for the 12th time. Well the boys have yet to see that evidence of the pool party or his 40 piece lounge suite that requires a whole Saturday to move.

A steady stream of availability did however came in over the last 2 weeks, Fintan did a late pull out, lucky for Fintan his dad did not do the same thing all those years ago. In his defense he came down and supported the boys wearing the Baby carrier very similar to the hangover outfit. Quagz was so keen he put his name down twice on the list AND flew in from Thailand and headed straight to the ground from the airport….more of that man later. Gully made it very clear to all that he was a prems player and was playing earlier in the day so was “unavailable”. He was also selling signed DVD’s of his international try which can also be found on U-Tube.

We had a few newbies start for the Wrinklies, John Clayton firing out of the chat group and onto the field with all the energy one would expect from a sprightly 35yr old. Mike Duggan proved he’s a relative of Hacksaw Jim Duggan and harder than his 2×4…..and then there was Hollywood’s mate Jock “the lost Kiwi” Clark who turned up looking lost and full credit to the SCC Manager spotted a fucken idiot a mile away and threw a jersey at him, told him he was late and to get on the pitch. 5 minutes into the Game with his body covered in a strange allergic Rash to the jersey he spotted Hollywood in Wrinklies kit and realized HE WAS ON THE WRONG TEAM. Not every day one debuts for the Wrinkles by playing for the opposition. To be fair on Jock he played an amazing underrated game for SCC and as a result we may loan him out more often.

Wrinklies warm up went according to plan, known as “the Crocodile” involved moving slowly out of the shade 30 min before KO and standing in the sun warming up, some with mouths agape like a croc as they realize “it’s WAY TOO FUCKEN TOO HOT FOR THIS SHIT”. The English were very uncharacteristic in their  whinge that it was too hot and later on that the beer was too cold, The saffers walking around excited yelling out Lekker, Bru and Biltong at the prospect of tackling people, the Kiwi wondering how their teams were doing in Super Rugby and the Aussies happy for any excuse not to watch their teams in Super Rugby.

Special mention goes to some excellent sideline support, Big Tommy in a act of Nostalgia brought down cut oranges and also playing as was Mark Mero-Sevic or Mark MS to those who can never get his name right brought a cooler full of 100 plus and had a couple of bollocking runs. The Beige Assassin resurrected the brilliant idea of 2 coolers, one of Icy cold water and a refill jug for the Water Bottles and one of Icy Cold water with sponges for break of play cooling down (a tactic successfully employed 6 years ago to the day when Wanderers in a never been repeated feat in Singapore Rugby History took out 3 Grand Final Wins in one day….Boooooooooom). Some may even add that the magic water with lashings of ice was the deciding factor in the dustbowl game. Special shout out to Conor Brenan for his game day support. If you have not gone and shaken his hand for his services with the van and coolers and beers and jerseys and balls and everything else in the Tardis on wheels then make sure you do at the next game.

With the sun beating down and already looking forward to the first water break the teams took to the center of the pitch for a minute’s silence for Fraser Jamieson’s Mum & His Family. An awesome Gesture of support by SCC as we honored a special lady who gave us our own Dr Faggot of Phuket Fame.

The Game kicked off hard and fast and both teams played well with very few errors considering the heat and the 4 months break since the last vet’s game. In an amazing substitution in the first minute Tiago after a week in Pattaya (sicko!!!) rubbed subbed himself off the wing where he did a knock on claiming he’s not a winger but a center. Jiff Halley quickly went one better to quip he’s not a prop but a Centre and Hollywood also got in the act saying he’s not a ref but a good guy. All clearly delusional. Weirdo’s aside the Wrinklies were first on the score board with a Great burner try from Jason How (was that that for some pace). Resident Yappie Yarpie Lancey Kronjie failed to convert from out wide so the score stood at 5-0.

The first drinks break could not come fast enough, and water was consumed at a rate faster than san migs on a Friday night. The icy sponge went down a treat with all, but it was noted that schmolly lightly sponging his balls saying “I wish they had this in Phuket” was even for these grizzly rugby players maybe a little strange and un nerving. Beige quickly isolated that contaminated sponge and it went straight in the bin.

The half time drinks break was memorable as the cut oranges did the trick as did the icy cold 100 Plus. BIG Thanks to Tommy & Mark MS. Never one to miss a Hearts n Minds opportunity The Beige Assassin ran a lovely cold 100Plus out to the ref which was gratefully received as was the promise of a few icy cold beers after the game. That was the Hearts n Minds….what came next was the Shock n Awe.

The third quarter saw SCC come out firing and a quick try that was converted saw them ahead 5-7. Robbo popped a gasket started yelling things like “Mongrel” “Caaaarn” and something about violating a buttcrack or being born out of wedlock.

That seemed to do the trick, Steve Hart, never keen on a bit of friendly buggery from Robbo scored under the sticks and therefore off Robbo’s growing anal violation list. Converted by Lancey Kronjie saw Wanderers ahead 12-7. Lance got the boys in for a quick huddle promising more of the same if everyone just played some simple but effective rugby of hitting it up and going wide when he calls it. Well that worked as Jason How (was that that for some pace) scored his second that was again converted from in front of the sticks by Lancey Kronjie. Wanderers ahead 19-7 as we entered the final water break.

The Third quarter provided one of the plays of the game, Quagz getting the ball in our 22 did an amazing series of Elvis inspired jinxes to out step the rushed defense, then headed straight for the opposition forwards who clearly though he was a mirage shimmering off the sunbaked field and the next thing you know he was through, untouched like a gazelle being chased by a pack of lions with a massive grin/grimace on his face but eventually run down nearing their 22 as the 52yr old gas tank was rapidly emptied of it’s looooooose Juice

With an extra sense of urgency and the sniff of a win the final break chat was clinical in it’s execution and everyone with 45minutes of rugby knew what had to be done…..rumble it up with the Pick n Drives, no 50:50 passes, keep the ball in hand, no solo runs, slow it down a fraction so the piggy’s can arrive to the breakdown and then give it to the back line to Fuck it up (sorry fella’s)

Mike Oxley scored his first Wanderers Try which was converted from in front of the sticks by Lancey Kronjie taking the score to 26-7. Slow and steady was the call for the 10min and the boys denied SCC possession and another first Wanderers try for HP “Sauce” Potgieter who scored out wide whilst yelling Lekker Lekker ya Dirty Fekkers. Lancey Kronjie in a fit of emotional man love and dry humping that’s quite frankly “just not cricket” on the rugby pitch failed to convert as it was suspected he struck the ball with his erect third leg. The score sitting at 31-7 was how the game ended followed by a wonderful Club Song on the pitch sung with gusto. Again, in a fitting tribute to a mate the boys formed up and gave 3 cheers to Frasers Family and his Mum then headed in for some well-earned beers.

3-2-1’s were conducted with the 3 to Steve “the hitman” Hart, the 2 to Mike Oxley and our Player of the Match went to our Portuguese Pattayan Tiago Costa Alves  (now there’s a mouthful….that’s what she said) The arrogance award went to Quagz for this jinxing runs and off he went as a complete rugby whore to help Bedok Auld Kings out who were short a few players

SCC quite rightly gave our Jock ‘the Lost Kiwi” Clarke their Dick of the Day award and as a welcome to the Wrinklies he had to consume an extra-large Bowl of Jager. Newbies and first time try scorers also had to partake in the Jager and feedback given was it would be much more agreeable if chilled with the beers.

Overall a great afternoon of vet’s rugby and with 28 players available we are close to hitting the magical 30 players as we head into Game 2 on the 30th March vs Bucks.

Put that date in ya Diary ya Fuckers 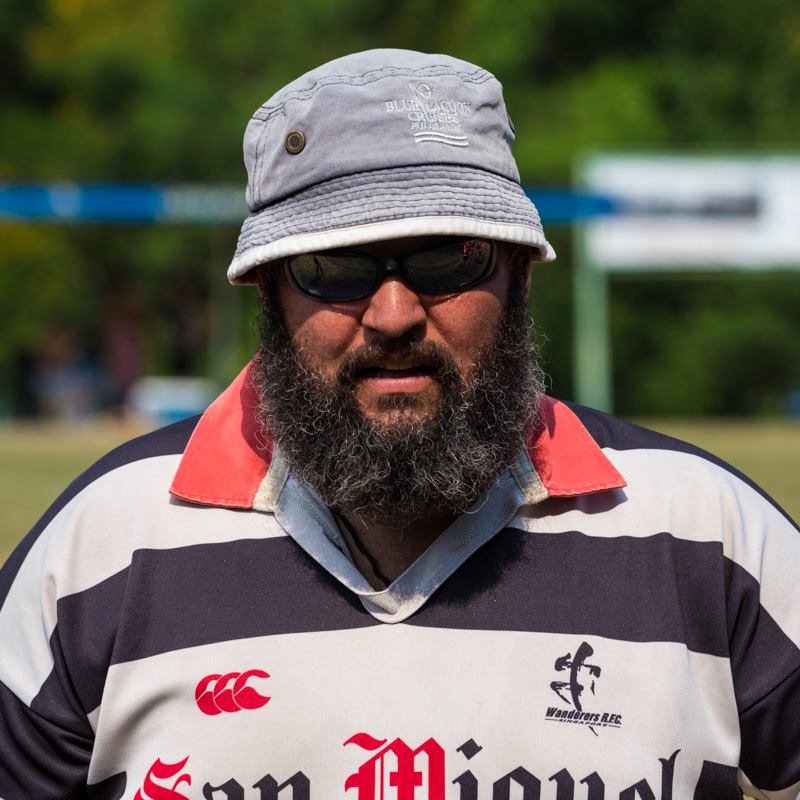 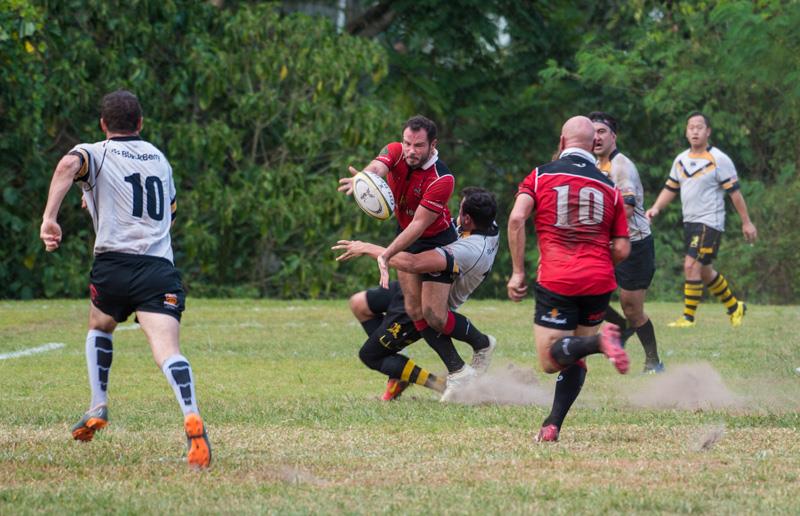 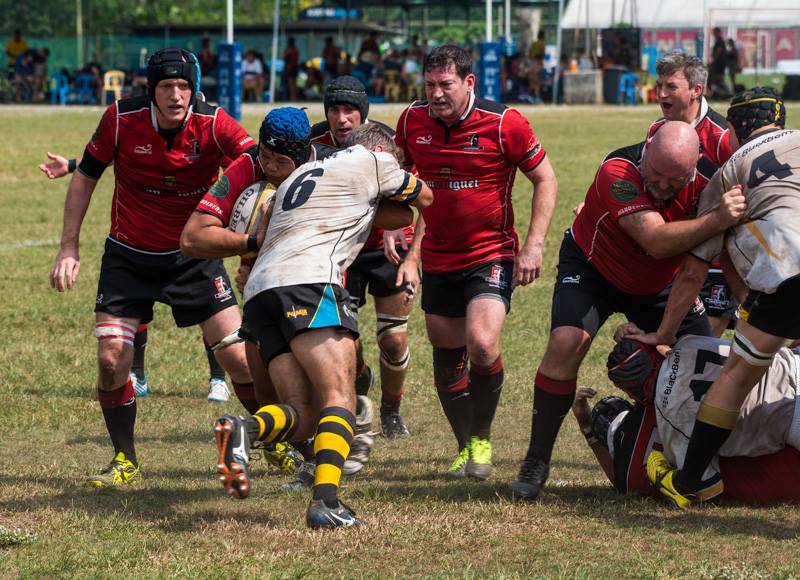