Depleted Gents go down to Kings in the Semi’s

The Championships reached the business end of the season on 24th March with the semi finals played on a wet and humid Queenstown Stadium pitch. Bedok Kings RFC 2nd (“Kings”) took on Wanderers RFC Gents (“Wanderers”) in the 1st semi-final of the day.

The Gents were already going into the semi’s at a disadvantage, without nearly 20 players due to National call ups and absentee’s due to the late changing of dates by the SRU. However the boys were fired up and ready to go, with Wanderers showing their strength in depth with players like Franciso ‘Trandisco’,  Glenn ‘Fake Flanker’ Oh, Jack Tucker, George Lyons, Robbo stepping up to help out, and Jamie Harris stepping down from the prems to cover for Tom Chamberlain’s absence.

Right from the kick off, Wanderers grabbed the initiative and were attacking from the outset. The initial flurry saw a series of knock on and penalties committed, with the King’s a man down after an intentional knock on sin bin after 5 minutes. Wanderers failed to capitalize, with the game being bogged down by the wet weather conditions which saw numerous scrums for handling errors.

The first real action came from a seemingly non-threatening box kick from Kings’ veteran scrumhalf Andrew Lee that led to a mix up between 2 Wanderers backs as they clumsily got into each other’s way to gift the ball to Kings flanker Kaisen Leck to run in under the post for the first try of the game. This opened the scoring for the Kings as flanker Ivan Tan then scored to increase the lead to 12-0. Wanderers answered back through hooker Francisco Vargas via a lineout driving maul for an unconverted try. However, Kings replied swiftly, with try from Kings No. 8 Shannon Sin who broke through the middle whilst juggling the ball to dot down under the post. Sin would score his 2nd try of the game after some great offloading skills minutes later as the Kings went into the break 24-5.

Both head coaches conducted intense team talks for their respective players during halftime, but that did not seem to curb the mistakes from both sides. A nice lineout move by Wanderers saw their lock Conor Brennan go over the whitewash untouched for an unconverted try to narrow the lead. Wanderers then started to turn on the pressure against Kings, with prop Khairulnafiz going and scoring with a pick and go, reducing the lead to just 7 points. However, the reduced lead would not last for long as a rare foray into the Wanderers’ half after the restart saw Kings go over for a converted try via Kaisen Leck again after a nice offload from lock Sonny Dutta.

Wanderers resumed their pressure right away from the restart and replied with a converted try via prop Kris Kowaliuk (his 5th of the campaign). However, by then it was too little too late as the referee blew for full time after another handling error shortly after. Kings advancing to the finals with a 31-24 victory over Wanderers.

Man of the Match – George Lyons 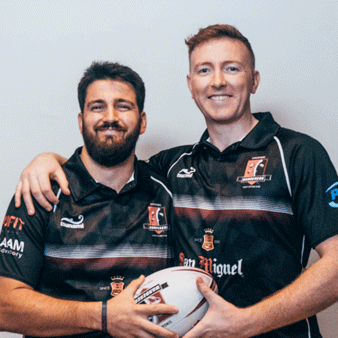