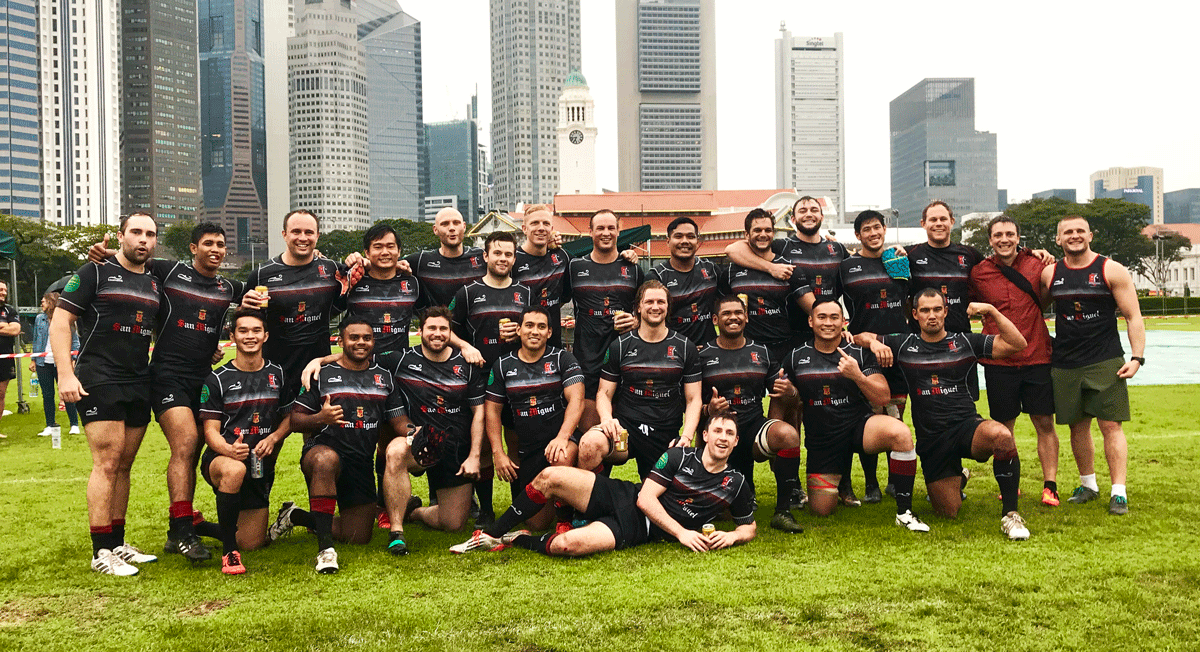 The spoils were shared on Saturday in a proper ‘game of two halves’.

Wanderers took to the field against Bucks looking to continue their winning league run and put another result over the team that beat them in the final last year. With Sebastian Murphy injured and Reiner Leong off with suspected Dengue, there were two changes to the team that beat SCC in the previous game. Bruce “Man Bun” Ashton came back into the back row, with Afeeq “the Future” Radzi slotting back into the second row. Mike Patterson made a welcome return to the bench after missing the Bucks and SCC games.

Wanderers started the game well, and some solid carries from the forwards gave Wanderers go forward ball which led to Robbie Macgregor slotting an early penalty. From the off it was clear Wanderers had dominance at scrum time, with the front row of Alvin Ho, Matthew Humphreys, David Gull prominent. However the Prems were dealt a blow 15minutes into the half as Robbie MacGregor was forced off with what was later diagnosed as an ankle fracture (all that extra Christmas weight he put on can’t have helped!).

Good phase play by the Wanderers pack, and some strong carries from forwards Bruce Ashton, David Gull and Fathur Raman, led to a series of pick and goes near the Bucks line. This resulted in Humphreys burrowing over, only to be cruelly denied by the winger holding him up over the line. However Wanderers were not to be denied, and from the resulting 5m scrum the pack put the pressure on, and after Bucks were warned once, Wanderers got the shove on and were awarded a penalty try for Bucks collapsing, 10-0 to Wanderers.

With the Wanderers lineout functioning well, and Frazer’s new innovative tactic working to nullify the Bucks rolling maul, any insurgence into the Wanderers half was swiftly cleared. Although they had to deal with another injury shortly after the 1st try as Wade Roo’s kicked through then twanged a hammy trying to chase his kick, and was replaced by Jonny Wong.

Wanderers 2nd try came after more pressure at the scrum. Wanderers getting some good go forward ball from bowling ball no 8 Murray Campbell, and then switching blind quickly and after Bruce had made some good yards, he offloaded to Papa Jon who then put Mike Patterson in in the corner to increase Wanderers lead to 15-0. Wanderers nearly scored again shortly before half time, Robbie Riha picking up a dropped ball and getting those famous knee’s up through the middle of the Bucks defence, however his offload off the floor hit a Bucks hand and Bruce couldn’t quite gather to score under the posts.

The 2nd half was frustrating for Wanderers, although they played the conditions well (as the rain had arrived), and the set piece was still going well. Some sloppy offside penalties, poor handling, poor defence let Bucks back in the game. After 2 penalties gave Bucks a lineout 10metres out, although Buck’s couldn’t get their fabled one trick pony rolling maul going, they did eventually score in the corner after a series of pick and goes, kicker Jonny Barber adding the extras.

Wanderers did hit back shortly after, scrum half Damien Hoo darting through a gap and stretching to place the ball down under the posts. However after talking to his linesman the ref harshly deemed that he had knocked on over the line, however still gave Wanderers the scrum 5m out. A decision that puzzled many.

Poor discipline and poor tackling again from the Wanderers let Bucks back into the game. More silly penalties from the Wanderers gave Bucks territory and again let them pick and go over the line after a series of carries. This led to a frantic last 10mintues from both sides.

Firstly Wanderers capitalised from a dropped ball and Tom Clarke went over in the corner, Mike Paterson calmly slotting in from the touchline. Before Bucks slotted a penalty of their own to put it back to 22-18. Wanderers pressure then gave them two penalties, Kieran Sasiadek hitting the outside of the upright for the first, before slotting the 2nd to put Wanderers 25-18 up with 5 to go.

However poor defence cost Wanderers again, after giving the ball away cheaply with 2mintues to go Bucks countered well, and although Tom Clarke’s scrambling defence saved a try in one corner. Bucks went again to the far side, with their centre going over at the death to score, Barber adding the extras in the final play of the game to draw the game.

Overall Wanderers can and should be disappointed with the result. After leading for much of the game, discipline and missed tackles ultimately cost them a game they should have won. Up next Bedok Kings on Turf City – 5pm KO.

Man of the Match – Murray Campbell