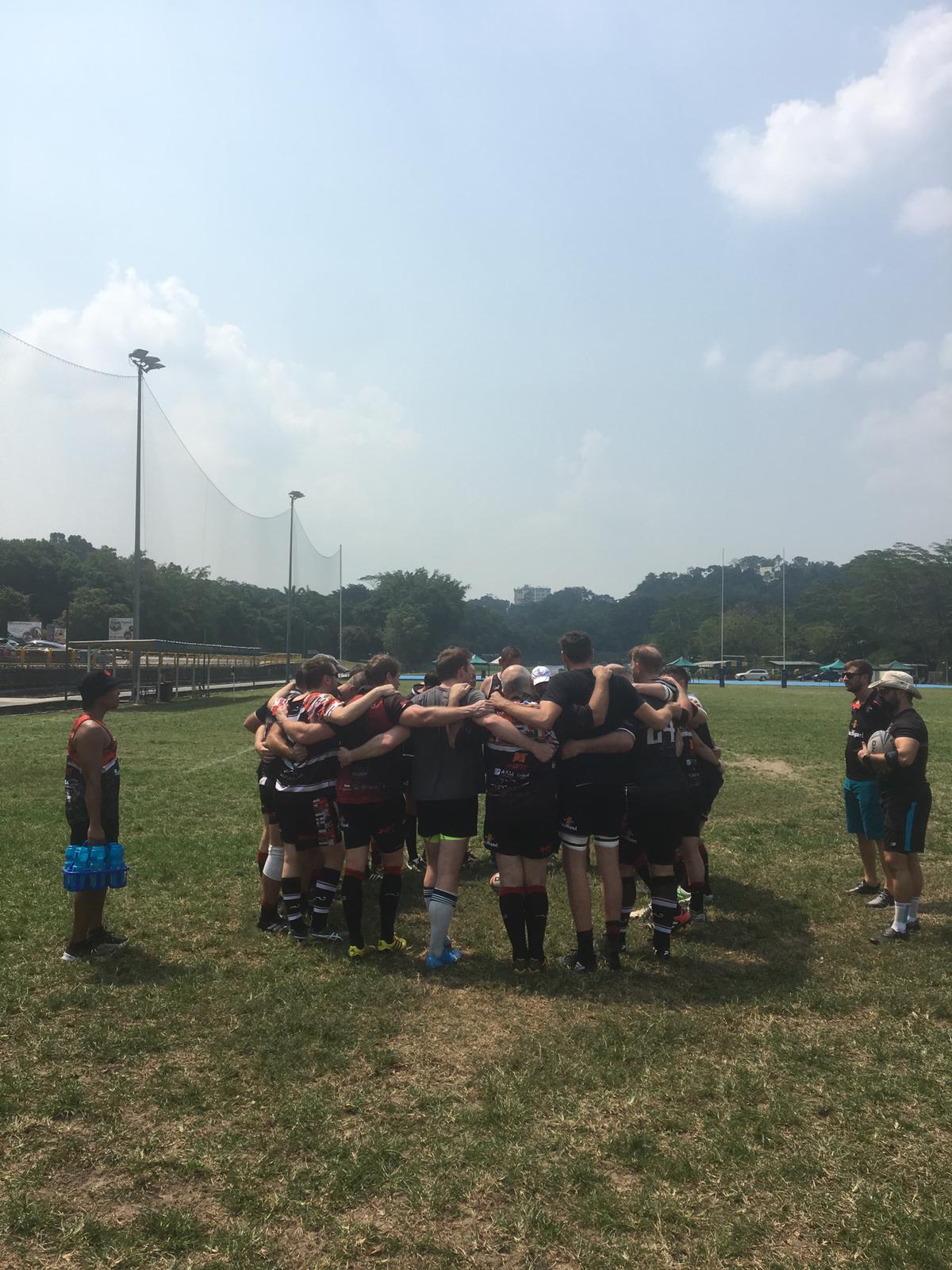 Wrinklies get up to start the MPC

Despite a dodgy start at the Wanderers AGM on the Friday night that saw more sausage than the Bar-B-Q factory, washed down with a tasty new kiwi brew that propelled the All Blacks to fame & Fortune and Rugby dominance the Wrinklies had high hopes for Game 1.

This was further excelled with claims Saturday morning that Steinlarger Pure does not give one a hangover and the only furry feeling is from not brushing one’s teeth before bed.

Robbo was so excited he went into overdrive early Saturday morning and is awaiting a monster phone bill from calling his daughter at 4am sitting outside mackers.

The team line up was a little strained with over 16 players unavailable due to other commitments and 3 out due to Injury leaving us with 22 warriors and worriers.

We had a magnificent no-show in Rhino, he says work commitments but we all know Gully and Sam’s threat at the AGM of rationing of Tape was the real reason he opted out.

Special Shout out to Wanderers legend Big Tommy who began his 23rd Season for Wanderers. In a club that is 25yrs old that is pretty bloody awesome

It was a motley bunch of Wrinklies that assembled at Centaurs Field to play the French Gaulois Rusties and nearly everyone in our group had the requisite Wanderers Shorts and socks albeit from a range of years. A good sign as it showed a lot of returning players with a good number of Wrinkles under the belt.

Hearts and mind started early with the ref as we gave him permission to penalise Paul “Hollywood” McKay at will. Also helped we promised him Water, 100plus and beers as the afternoon heat was thicker than a Aussie at High School.

We had 2 new Wrinklies start that day Ben ”little Tom” Campbell and Mark “Mr’ Painter. Both gents had excellent first games and came away unscathed from their first encounter apart from the mandatory scrapes, cuts and bruises.

The worrying kicked in when we realised we had no spare backs and William “BOB” Gaillard despite a back issue (aka #shaggersback) offered to be the lone reserve back in case of emergency.

The game kicked off and it was pretty evenly matched surging back & fourth as both teams played thing close to the fatties and confidence in the back line not helped by some pretty ordinary knock-on’s by Fintan and Josh the Aussie (a reoccurring theme you will see here). Eventually a blistering break by Kiwi Hollywood saw a lovely offload to kiwi Steve “the hitman” Hart that was unconverted by Kiwi Paul “bene” Benefield.  Kiwi’s in rugby….who would have thought

The second quarter saw a fightback to the Frenchies who were determined and dominant in attack, It was great to see albeit 105 and 80 years too late for some. Our German Dynamic Duo were rampant in their defence with Foxxy and Lorenz both seen looking a little dazzed at the French attack and looking to the sky during break of play wondering where the Ju87 Stuka’s were to soften the enemy.

A couple more knock-on’s by Josh the Aussie who was running awesome lines at pace but somehow failing to bring his hands to the party. He was finally rewarded with a try set up by Kiwi Paul “bene” Benefield who also converted.

Special mention goes to our physio Sam “Love a Google Sheet Questionnaire” Brennan who took control of the French Elbow and got him squared away and away from the field to A&E despite the medical teams effort to do the opposite.

This is a timely reminder to GET YOUR INSURANCE SORTED as the injured player was sorted quick smart and testing the elbow with cold beers within hours of injury. Love it

Third quarter again saw the French on attack…WTF!!!!…did they forget the white flag or was it used mistakenly as a sling when JP went to hospital. They hit back with a quick try and the score was tied Wrinklies 12 Gaulois Rusties 12.

I little piece of magic happened and I am not talking about Robbo raising his voice nor was it the Magic Water in the form of the Beige’s Ice Sponges. That did help do the trick, especially for schmolly as he lightly sponging his balls humming softly to himself, but the turning point was the French Winger Kadar on a runaway down the wing chased down by #shaggersback BOB the Frenchman who brought him to ground. I am under no illusions that had they scored the French would have found a fifth gear and been away faster than you can say Baguette. Great stuff by BOB and bittersweet for the Gaulois that our own Frenchie served them the coup de grâce

What followed was a Kiwi rugby spectacle probably fuelled by that amazing kiwi beer Steinlarger.

The last quarter kicked off with Robbo reminding the boys to slow it down and play good basic rugby. He had to tell them twice but still the didn’t listen so he just shut up and that’s when the boys got worried and slowed it down. Little did they know Robbo had hit and just couldn’t be F@#ked shouting ( a first) so at times the play was a bit erratic but all players and French spectators were pleased at the final whistle. Just before that Kiwi Crispy scoring again with kiwi Paul “bene” Benefield converting.

Post match the 2 trays of Cold San Migs courtesy of Wanderers and Club Sponsor Pacific Beverages quickly went south. We got our coolers together and mingled with the Gaulois and did our short 3-2-1 session together. Was great post match to see all the boys chatting and socialising. It’s what Vets rugby is all about.

Our 3 went to kiwi Paul “bene” Benefield for his masterful display in the backline at #10 and some good kicking to make up for his terrible dad jokes.

2 went to Schmolly who had a blinder and was a workhorse all game not scared to take the ball up. A special icy Sponge will be set aside for schmolly’s ball sacks it that’s what it takes to get a rise out of him (all pun intended)

1 deservedly went to Kiwi crispy who was inspirational. He doesn’t say a lot for a halfback but actions speak louder than words with a great game and two tries.

Dick of the Day #OneKnob goes to Josh the Aussie for his “look mum no hands” performance. It was raised by some that the super tight vests had cut of circulation to the arms but that theory seemed flawed as he seemed to hold his beer OK

Great to see Tall Timber Kiwi Sean Cuddihy back on the paddock in Wanderers colours and both Lorenz and Foxxy had great games as our resident stormtroopers. Mr Fender did not disappoint as he too worked hard and credits his performance to the Steinlargers. Tiago was consistent and a thorn in the French side. A shame we did not have more reserves in the backs to give him a rest. Fintan after the knock on proved a good distributer and got the ball wide.
Special thanks to the sideline team of Gibbo, Shah, Mark M-S and Pete for managing subs and running water. Special thanks to Sam Brennan for his constant professionalism and cool head in a crisis.

Big thanks to Gully for his chat on the sideline, it really made the boys want to get out of the shade and onto the pitch and away from it #GullyBantz

Next game 5th October followed by RWC event at the Penny Black, (Or head to a far superior venue, with far superior drink.  Molly Malones level 2,  to watch England vs Argentina at 16.00, and Japan vs Samoa at 18:30)