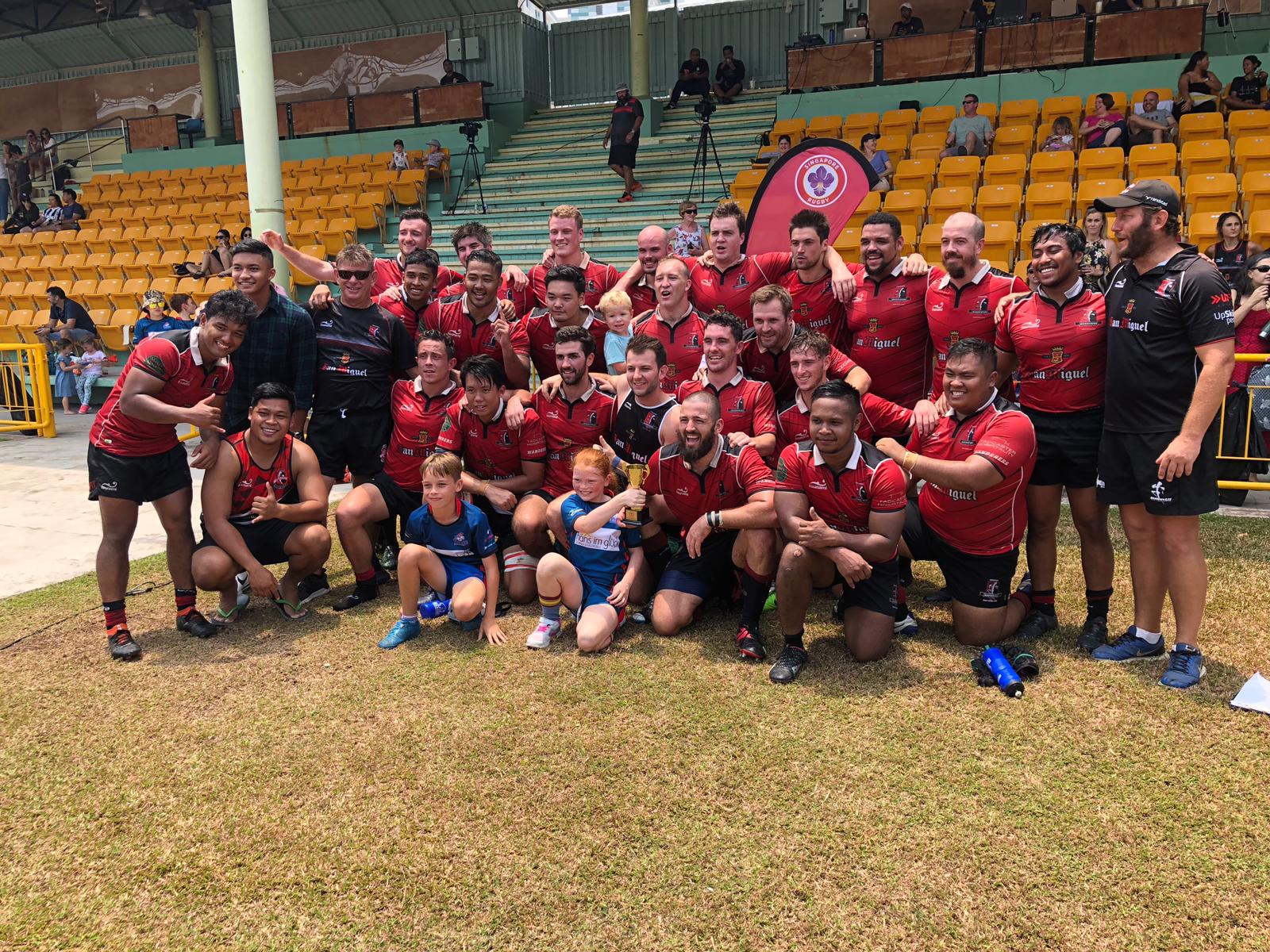 March, 2017 Semi-Final: Wanderers Gents trail Oldham 19-13 at Yio Chu Kang. Just as the Gents are awarded a penalty on Oldham’s five metre line, with all the momentum, nostrils snarling and minds fixed on the job, the lightning alarm fires up. 16 minutes remain in the match, but the Gents are not given the chance as the match is called by SRU and Oldham advance only to be destroyed by SCC Tankards in the final. 2017 Gents: beaten semi-finalists.

March, 2018 Semi-Final: Wanderers Gents lay beaten by Bedok 2’s 31-24 at Queenstown Stadium. Unfortunate rescheduling of the finals to Chinese New Year had many of the Gents’ key players away on the date. Rovers, and Prems alike, answered the call but without the unity of a seasoned squad, nothing went to hand. 2018 Gents: beaten semi-finalists.

Every season reflects the hours of dedication to trainings and fitness, and dedication on match days to put your body on the line.

Friday, March 22, 2019: Wanderers Rovers begin what is to become a historic weekend in Singapore rugby. No club has ever won three finals, except the 2013 Wanderers. The Rovers play their part with strong scrummaging, commitment in defence and brilliance in attack and counter-attack. The Rovers take down the arrogant Bucks 7-3. 2019 Rovers: Shield Winners!

Saturday, March 23, 2019: The underdog Gents are set to face Gaulois at Queenstown Stadium. The Gaulois come off an outstanding run in the league having beaten all second division sides and upsetting premiership side Bedok 1s. Gaulois are strengthened by national team players at open-side and at tight-head. Their record of seven wins and only three losses dwarfs the table as four teams enter the plate finals. Finishing with 32 points on the table (5th in the nation) compared to the Gents’ 19 table points (shared 7th in the nation).

Unbeknownst to Gaulois, the Gents had been building. The Gents had handled Oldham in the league, winning 17-8. The Gents had lost to SCC 2’s, but only spilt the ball over the line on the final play to lose by just four points. Gaulois had only escaped the Gents three weeks prior by a narrow 5-0 victory. All matches had been close and as one-sided as the table appeared, the Gents knew they could defeat any squad on their day. And this was to be the Gents’ day.

The Gents had recently been bolstered by the inclusion Kyle Franklin, Baptiste Uhalde and Harman Potgeiter (HP). Their captain was set to return from injury. The squad had suffered through the burning sun of Queenstown the week before as they put down the Tankards 18-10—removing all SCC from all finals (some say the Sunwolves match was well attended by the arrogant club, as they “had nothing better to do”). Everything was building nicely as the squad trained during the week, despite torrential down pour and lightning delays. They trained in the presence of professional squad, Asia Pacific Dragons. Queenstown was the home pitch of the Wanderers and they were set to defend it.

We could have guessed something special was going to happen when George Lyons showed up on time, or when the Gaulois captain lost the toss and chose to play into the wind.

The first ten minutes set the tone for the match. The Wanderers scrum and lineout looked strong, but it was the dedication and organization on defence that set the stage. The ball spilt back and forth, but the Wanderers dominated the territory match up and Gaulois could not break the red line, nor could they match the continuity of the Wanderers until Dan Scriven decided to hit up a crash ball into the two largest men on the paddock, spilling the pill. Still the Wanderers pressured as Aidil and HP forced the Gaulois wing into touch. The first Wanderers maul put down the platform for the day, driving from the 22m down to the 5m—an unlucky whisky lost possession into touch, but the red defence took the pill back with sustained pressure and committed tackling. Plenty of red balls ensued until Gaulois gave up a penalty right in front and Dan (recovered from his crash ball) slotted the first 3 points.

Gents continued to chase well and play to their structures with more excellent chasing from HP and Aidil. The pendulum swung as Gaulois, on the back foot, put in a crossfield kick, collected only to be covered well by Dan at 15. By the 14 minute mark, hands were on hips and the Gaulois lineout malfunctioned, Khai chased down a loose ball to relieve the pressure. Followed by big tackles from Brook, Wanderers had possession and sent the ball to halfway. One particularly greasy run made in midfield led to a half chance, but Gaulois were not classy enough to squeeze the pill and spilt it on the next phase.

The ball remained in the Wanderers’ half, but the red line would bend but not break. Metres were made outside, but drifting and communication, led to Gaulois mistakes. Finally, Chris, Brook and George, each frothing at the mouth charge the French back into their half. Every single back shovels shit, errors compel and the red work rate is unmatched.

Finally in possession on the Gaulois 22, the Wanderers set to task, continutity through reds and blacks as the blue line is broken and struggles to keep its shape. Baptiste breaks wide, Jamie supports, Rup snipes, Kris red ball and Brook shifts it from 9 to Khai who scores the opening try left of the posts. The Gaulois are stunned. Dan converts—2/2.

Gaulois’ 9 decides to play some pace and begins to take advantage of the heat and the tired bodies as he taps and goes bringing the blue into the Gents’ 22 for the second time. Sustained pressure from les bleus leads to a penalty in front. Somehow, the kick sails wide. The Gents breath in the opportunity and the French begin to fade in their belief. Great kick and chase from Ed as the play goes back into the blue half.

Gaulois frustrated that they cannot break the red line run unsupported into the Wanderers’ captain on the halfway who is able to pinch the pill, Rupert puts in a huge boot and somehow (straight out of the engine room) George puts the blue fullback under huge pressure. Amazing chase. Possible try?

After French mistakes the Wanderers have another attacking lineout on the Gaulois 22. The Gents lineout, outstandingly led by Jamie Hemmings all season, sets its second maul. Red rumble down to the five metre. Baptiste runs a tight line, makes a half break and pops the ball to Jack Tucker for a well-deserved try. Jack who has been tackling himself silly all season deserved to hear his name from the ever-growing crowd. Dan converts now 3/3.

Half time comes as a huge relief to the lads, dying in the 33 degree weather.

The chat at half time is stick to your structures and don’t compound your mistakes.

Gaulois kick and we have the first real chance to show our mettle. Rup’s box is charged down. He flies back to make the covering tackle with Dan. The side realigns, penalties are awarded, but every set piece is a battle for the French. HP goes down in midfield with an aching back, Beige and Higgins on hand offering Jaegers, but HP stays on the field. Lucky he stayed because as the Gaulois shift it wide Baptiste harasses their centre back to the 22 and the wing is met by Jack and HP causing him to knock on. Brook pounces on the loose ball and Rup boxes near the halfway. What a sequence. Feet on our own line and we stayed committed and pushed them back to the half through our defence.

From the lineout, Kris rips the ball loose, Rup punts it deep into Gaulois territory and showing ridiculous pace Dragon flies down the pitch and tackles the French fullback over his own line giving the scrum feed to the Wanderers on the Gaulois five. What a swing—from 5m to 5m!

The Gents do not capitalize, but the Gaulois are denied the chance to get back into the macth. With 30 minutes left to play, all players rest their hands on their knees and try to breath.

Gaulois return to Wanderers’ half and when awarded a penalty near the 22 have learned that there’s no way through, so they settle for the 3 points. This time a new kicker slots it.

At the 60 minute mark Zuff enters the fray, lifts in a single lineout, slits his skull and Khai is dragged back on. Zuff, to his credit, would return bandaged and hungry for reds.

Wanderer scrum outside the 22 and a B Up Whisky is called, Dan, fearless as always, crashes up and gives the necessary go forward. Rup snipes with plenty of support, Ed steps into 9 for a crushing red and then Ed shifts it to Brook who plows through and dots it down under the sticks. Scriven: 4/4.

With ten minutes left to play, Gaulois go backwards and errors are forced. Huge scrums from Webby and Zuff with followed up pressure from Rup, Jamie and Shamir, ripping the ball of of the number 8. Ed and Baptiste stay relentless on the next chase forcing a knock on. Rauf and Shaik combine explosively down the blindside, the fringe defenders are committed with a sharp red ball, allowing Baptiste to side step through space and score the clinching try. Danny: 5/5.

The clock goes red, but Gents know there’s still time. Rauf is yellow carded for being as far away from the action as humanly possible??? The lads find a way to lift. Fresh legs find a way to chase as Cornelius and Shaik put on pressure, Chinese Dave pilfers in midfield and the Gents continue to march.

As if he just wants the match to end, Rupert picks, shrugs off two tacklers and carries the third over the try line. An outstanding captain to this squad all year, his presence was felt as much as his absence.

And finally we learn that Dan does not possess a droppie: 5/6.

The final whistle blows. The crowd tunnels up and the trophy awarded to the underdogs.  We did it!

After seven amazing years, giving everything he could to the club, Coach Rhino lets Kris Kowaliuk lead the song—a moment he will NEVER forget.

The Prems got redemption from their loss to Bucks in the National Stadium in 2017. For the first time in seven seasons and the second time ever, a club had won three finals! I AM A WANDERER! 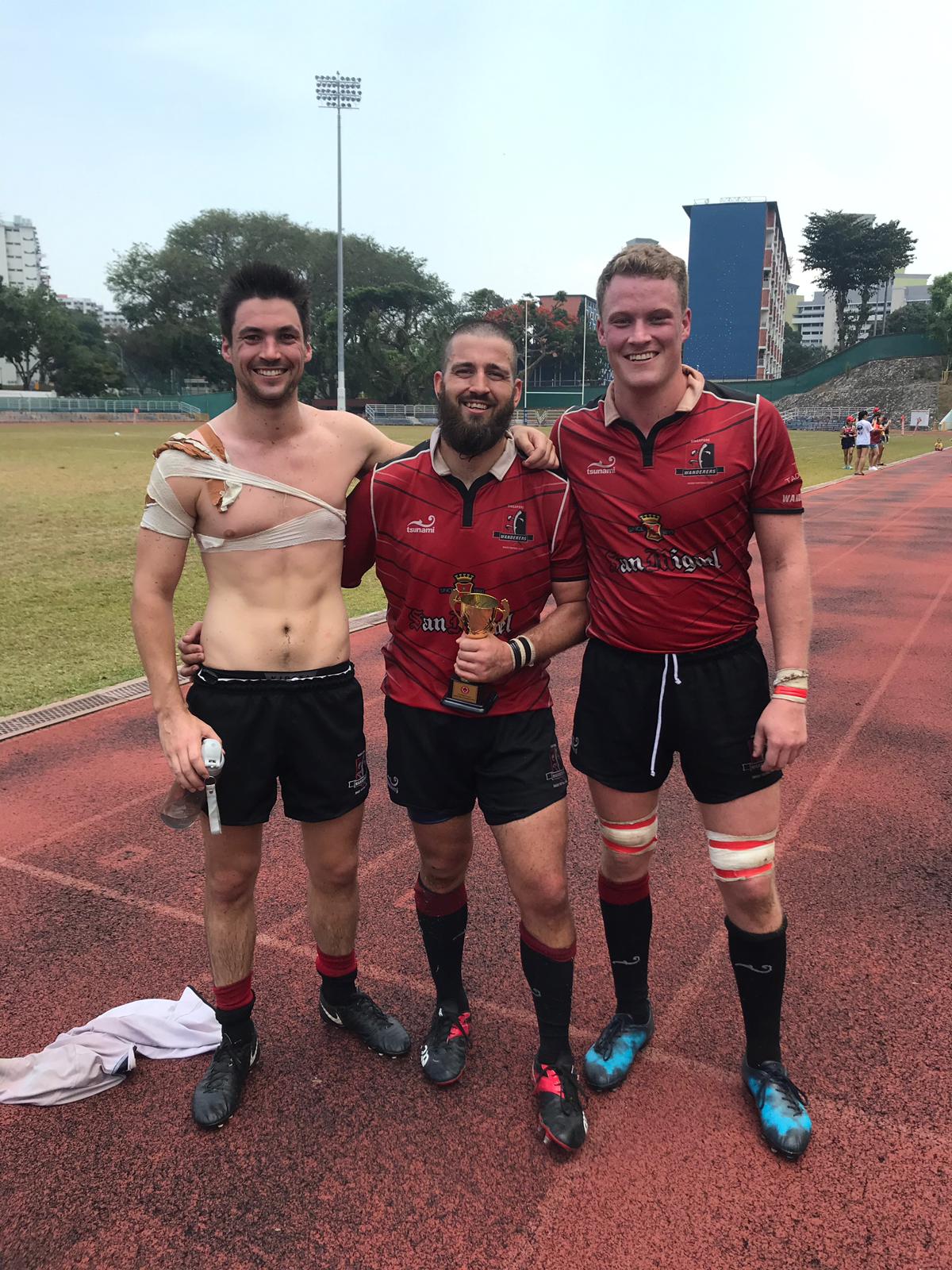 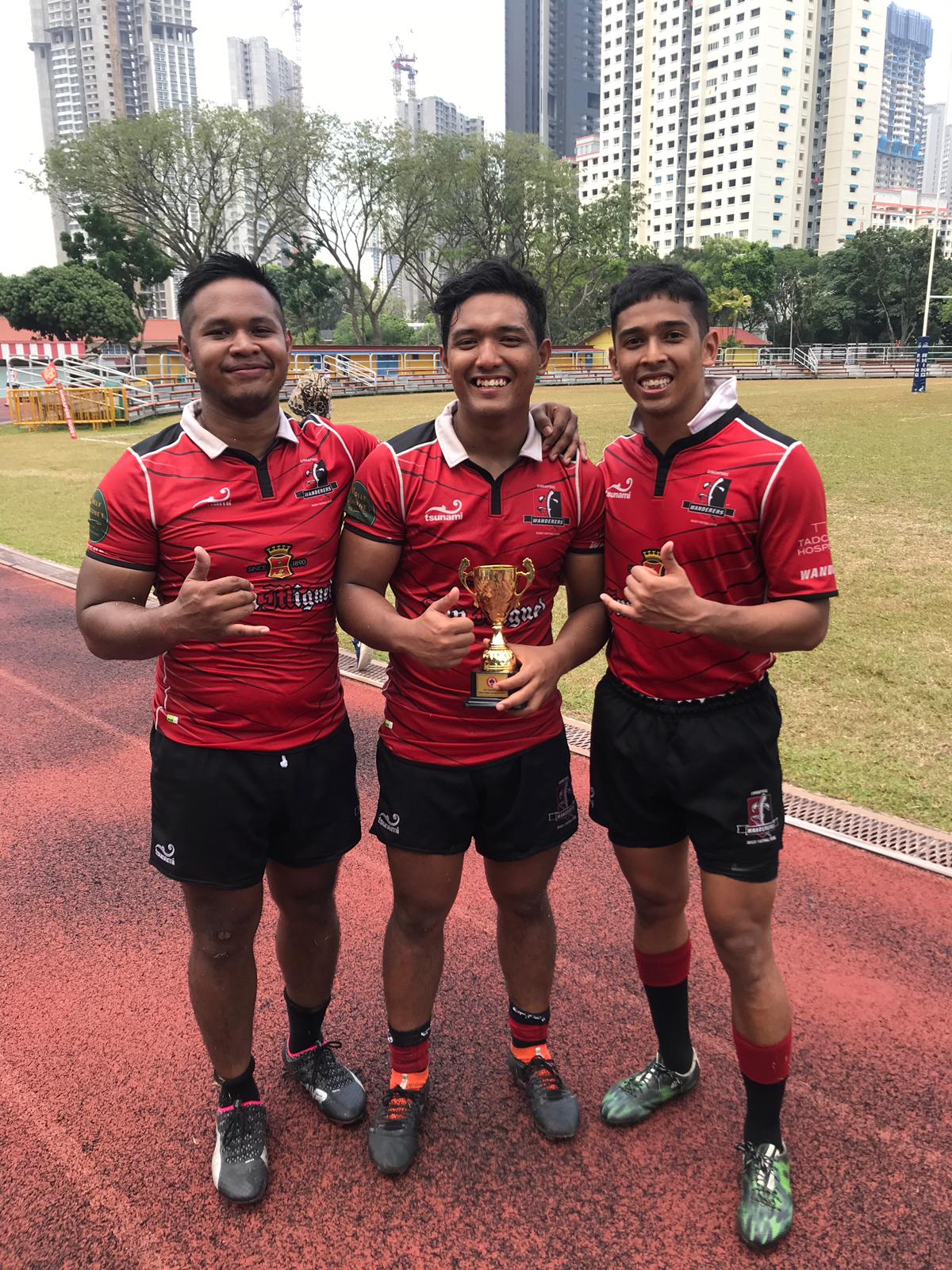